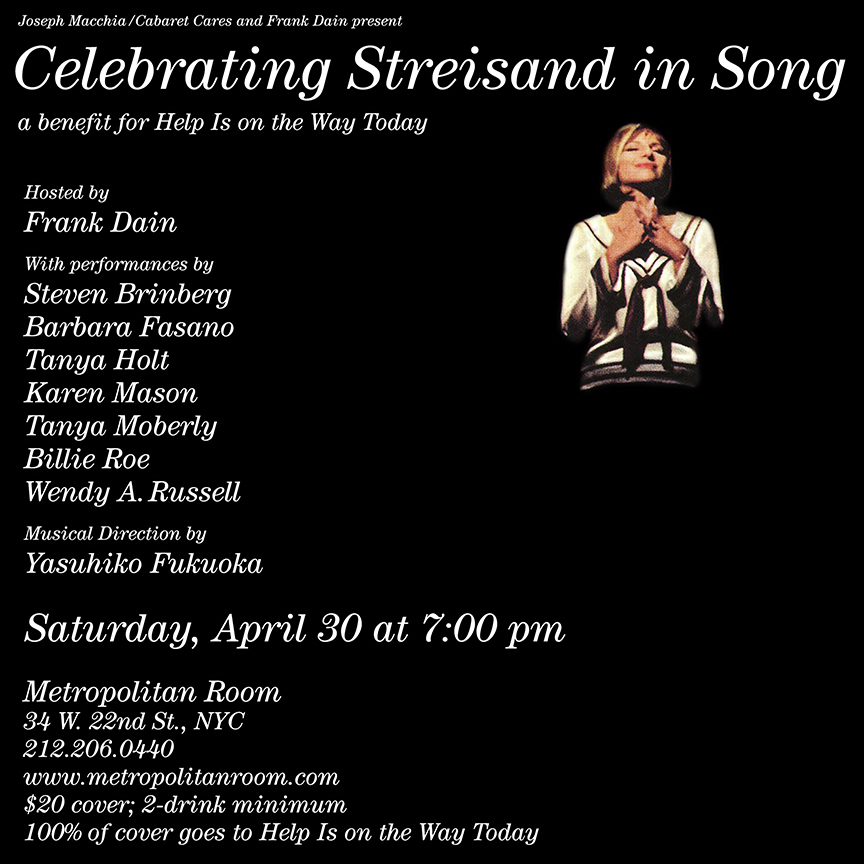 Card-carrying Barbra Streisand Fan Club members were out in full force to celebrate The Main Event of April: this true legend of long standing’s birthday. Her hits were hits with the audience, whose membership clearly included Simply Streisand admirers and those who admired a top roster of cabaret stars. Usually dressed as “the greatest star,” Steven Brinberg showed up as himself, yet hilariously keeping tics, smoothing the non-existant long lock of hair, S.B. in B.S.’s voice and then his own. Funny Lady Karen Mason had the night’s best line, straight-facedly saying she was pleased to be part of “this fundraiser for Barbra Streisand.” (It was actually a Help Is on the Way Today benefit.) Of course, she also scored with vocal prowess. A real Guilty pleasureful highlight was two terrific Tanyas—Holt & Moberly—dueting on the disco hit “No More Tears” (aka “Enough Is Enough”) nailing and sailing those big, big notes, causing some, I’d bet, to nearly Wet their pants with glee. Billie Roe took the torchy route with “My Man” and a lady who can say “My Name Is Barb(a)ra, Two,”  Ms. Fasano, provided early shine and show-closer “Don’t Like Goodbyes.” Another “Don’t” moment came via “Don’t Rain on MY Parade,” with Wendy A. Russell wisely knowing the “Don’t copy Barbra” rule, repeating her creative and commanding re-imagined treatment that had caught the ear of cheery cheerleading host, this magazine’s editor Frank Dain, when this second runner-up sang it in Mama’s Next BIG Act contest. Yasuhiko Fukuoka accompanied most—quite marvelously. We Partners in Streisand appreciation could say Color Me Barbra-satiated. Any time such a celebration causes a sensation, we can exult that “Happy (birth)Days Are Here Again” and go Nuts, gratefully greeting the group: “HELLO, GORGEOUSly-singing cabaret ‘People!’”