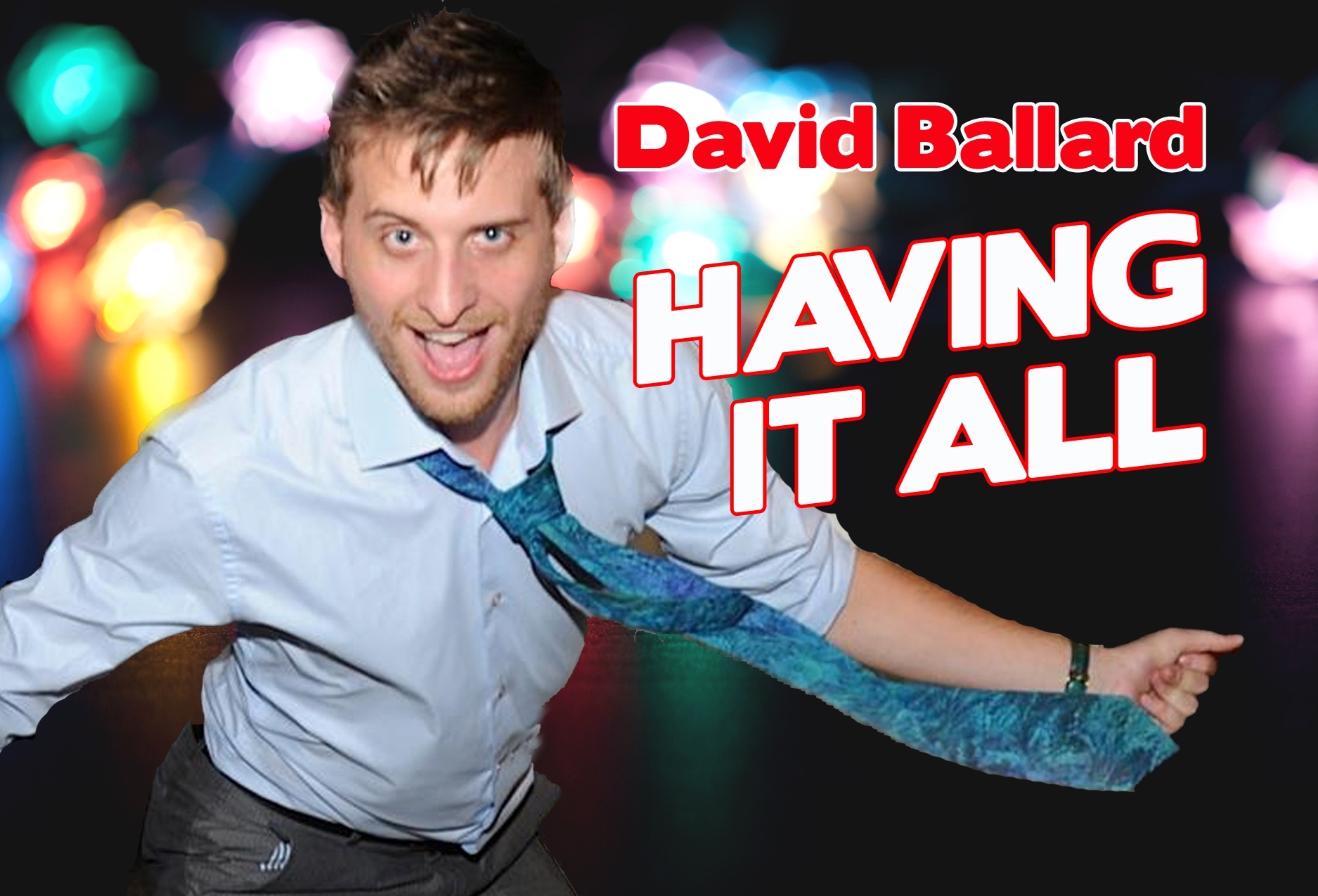 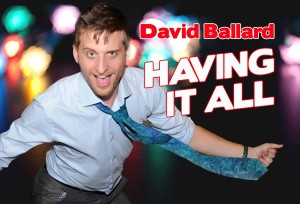 Like many aspiring actors in New York, David Ballard holds down a day job as a waiter.

But in Ballard’s case, waiting tables did more than just help make ends meet between shows; it led to the Concord native’s biggest gig yet.

When Etcetera Etcetera, the Theater District restaurant where Ballard has worked for the past six years, started running a weekly cabaret show, one of his regular customers asked Ballard why he did not test the waters as a performer.

“I thought about it for a little while and said, ‘You know, you’re right. It’s time for me to do this,’ ” he recalled.

Ballard asked the producer of the restaurant’s show, Tanya Moberly, to serve as director for his hypothetical solo show.

Called “Having It All,” Ballard’s production will have its area premiere this weekend in the same Concord church he attended with his family as a boy.

“I was flying blind,” Ballard said about his attempts to write a theater piece for himself.

But not long after deciding it was something he wanted to try, he was accepted into the BMI musical theater program in Manhattan as a lyricist. In the program, he not only wrote some of the songs in “Having It All,” but he also met other up-and-coming songwriters and found songs of theirs to incorporate into his show as well.

More than anyone else, though, he credits Moberly for showing him the ropes.

Although he has studied singing and performed as a vocalist since childhood, and continued through high school and Emerson College, Ballard said, he knew very little about putting together a show.

“Having never done this before, I relied a lot on my director to help me figure out how to do this,” he said. “She told me to give her a list of songs I like and artists I enjoy.”

Ballard’s list included Kate Bush, Annie Lenox, Sting, the Beatles, Boy George, and Loudon Wainwright III. “Then we looked at the list together and structured a loose narrative using those songs, other songs Tanya introduced me to, some that I wrote, and some that friends of mine wrote.”

The narrative, which Ballard calls semiautobiographical, involves the journey of a young man searching for self-awareness, sexual identity, and a sense of acceptance.

“He’s figuring out his place in the world and exploring themes of childhood, romance, loss, and heartbreak,” he said. “One of the songs I wrote for the show is called ‘So This Is My Life.’ In it, I say, ‘This is where my life has taken me, it might not be what I thought it would be, but I accept it for what it is.’ ”

Unlike the character in his show, Ballard said, his search for self-identity never required him to run away from home, or even want to.

“I grew up in an amazingly supportive environment,” he said. “By that I’m referring not only to my family but also my church community and my school community in Concord. On the other hand, when I graduated from college I did move to New York City, which is expressed in that song.

“So there are some parallels, even if it’s not exactly autobiographical.”

Ballard, who will be accompanied by his musical director, Garrit Gaudan, on piano, performs “Having It All” on Friday and Saturday at First Parish in Concord, 20 Lexington Road. Social time with refreshments begins at 7 p.m. (wine and beer available for purchase), with the performance at 8. Tickets are $20 and will benefit the Trevor Project, a suicide-prevention program for LGBT and questioning youth. Tickets are available in advance at 978-369-9602, and at the door.

DANCE FUND-RAISER: Students from the Dance Academy of Siagel Productions take the stage at Newton South High School, 140 Brandeis Road, at 5 p.m. Sunday to perform in honor of Jared Connor, an 8-year-old who has a rare genetic disorder, Sanfilippo syndrome.

The all-ages event brings together some of the area’s most talented hip-hop dancers to raise money for Jared’s Fight, the foundation started by the Connor family. The 90-minute show will feature a range of hip-hop talents, including approximately 60 Dance Academy students from Newton, Needham, Wellesley, Weston, and other communities.

Tickets are $10, or $5 for ages 10 and younger. All proceeds will be donated to finding a cure for Sanfilippo syndrome. Purchase tickets at www.thedanceacademynewton.com.

CELEBRATING IRELAND: “From Ireland to America,” a celebration of Irish and Irish-American culture performed on traditional string, wind, and percussion instruments, takes place Sunday from 2 to 4 p.m. at the Shrewsbury Public Library, 609 Main St.

MODERN CLASSICS: A dance and music program presented by Dance Currents Inc. and Pro Arte Chamber Orchestra of Boston will be presented at Newton’s City Hall, 333 Homer St., at 3 p.m. on Sunday.

The program will feature the modern-dance troupe performing “Ressourcement’’ to Bach’s Cello Suite in D minor, “Emergence’’ to Arcangelo Corelli’s Concerto No. 8 in G minor, and “Dawn’’ to Louise Farrenc’s Trio for Flute, Violin, and Cello in E minor, and Nadia Boulanger’s Pieces for Cello and Piano. Tickets are $15-30.

For information or reservations, call 617-796-1540 or go to www.newtoncommunitypride.org.

GREEN ANNIVERSARY: Reagle Music Theatre of Greater Boston presents the 16th anniversary edition of “A Little Bit of Ireland” on Saturday at 2 and 7 p.m. and Sunday at 2 p.m. at the Robinson Theatre, 617 Lexington St. in Waltham.

Highlights include Irish tenors, step-dancing, pub songs, harp music, and the storytelling of Irish comic Jerry Walker. Tickets are $35 to $50 for adults, with $3 off for seniors, and $25 for ages 5 to 18; rush seats at 50 percent off are available one hour before curtain with a valid college ID.

To purchase tickets or for more information, go to www.reaglemusictheatre.com, call 781-891-5600, or visit the theater box office.

RETELLING HISTORY: The Metropolitan Chorale of Brookline and the Brookline Symphony Orchestra present “American Stories,” a program of works inspired by vivid chapters in the country’s history, on Saturday at 8 p.m. and Sunday at 3 p.m. at All Saints Parish, 1773 Beacon St., Brookline.

Tickets are $25; or $20 for seniors, students, and Coolidge Corner Theatre or WGBH members; $15 for groups of 10 or more. For details, go to www.metropolitanchorale.org.

OVERCOMING AUTISM: On Wednesday from 7 to 9 p.m. in the Medfield High School auditorium, 24 Pound St., the Medfield Music Association hosts an inspirational event featuring the music of pianist and composer Matt Savage, who overcame various challenges associated with autism to launch a musical career at the age of 8, and is working on his graduate degree from the Manhattan School of Music, and music education and autism authority Rhoda Bernard, from the Boston Conservatory.

The evening will also feature performances by students from the conservatory’s autism program, as well as the Medfield system’s Marimba Ensemble, and the Medfield High School Jazz Combo (with Savage).

The event is free, but a $5 donation at the door is suggested to help launch a music scholarship for Medfield children with autism or other special needs. With limited seating, online registration is required; any remaining seats will be offered to walk-ins. To reserve seats or for more information, go to www.medfieldmusicassociation.com.