Cutsy Cunningham’s Daughter is a Smart and Funny Lady 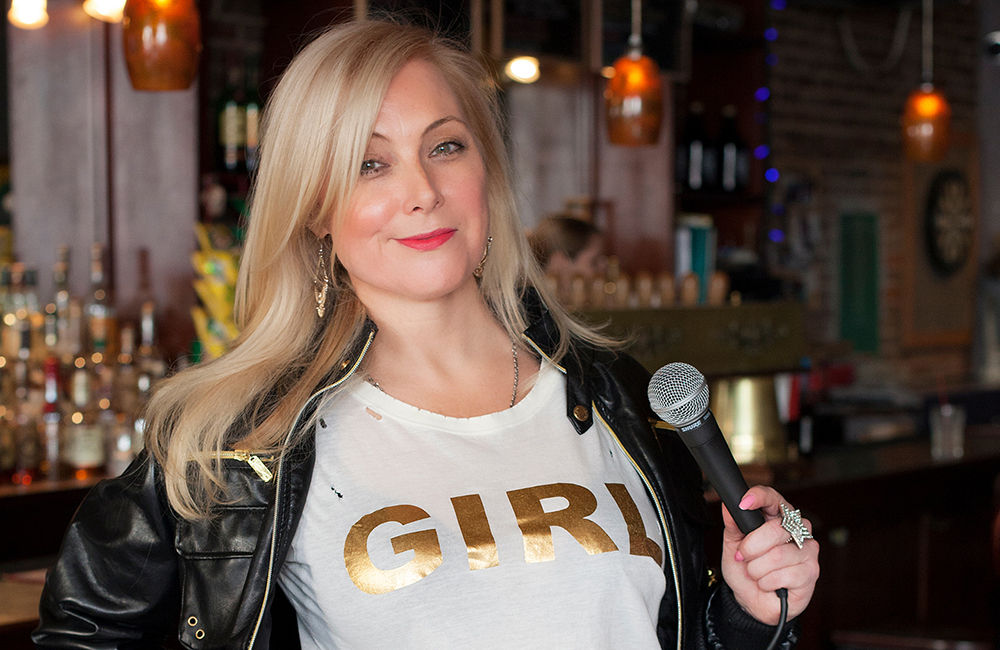 I arrived a bit early at Don’t Tell Mama a few days ago, notebook in handbag, led by my brain to believe that I would be hearing a comparatively unknown songbird warble classics from the Great American Songbook. Where in the world had I gotten that idea? Nowhere special. I am just aware that Don’t Tell Mama often provides relatively unknown performers with a stage on which to get their starts. The room was not packed but respectably full. I faced a long table at which 20 young, well-dressed, smiling and happy early-thirty-somethings sat chatting away .

I glanced around the showroom. As always, the prerequisite baby grand piano sat on the right side of the stage, but why was it covered by a cloth and why were two stacks of used self-help books and an assemblage of necklaces strewn on it. The other side of the stage contained a metal clothes rack on which a curious collection of ladies’ outfits were hung: a simple, prim, white all-girl Catholic School uniform-y shirt, a dark blue mini-skirt, a long-sleeved dressy evening blouse bedecked with glitzy red sequins, and a peculiar sand colored kaftan with a design on it that paid homage to the art of Paul Klee. I found out later that they were all props used in the show.

The lights dimmed. Still no piano player. What was going on? Then Kendra Cunningham appeared on stage – a good-looking, statuesque, buxom, blonde in a hip-hugging aquamarine gown. She was in her mid-thirties and began talking about herself, her life, her Irish family, her therapists in a very honest, amusing and straightforward way. Kendra reminded me of another Irish lass I’d heard at Don’t Tell Mama, Nancy Witter, whose one-woman show describes what life was like for her “Growing Up MacDougal.” Kendra was as bold and revealing as Nancy about her life. She also reminded me of Amy Schumer. Kendra was as unfiltered but not quite as explicitly detailed about sexual matters as Amy Schumer.

Evaluating comedy is always easy. People either laugh or they don’t. And laugh they did. The young couples at the long table facing me roared . My very Jewish husband and I not only laughed out loud, we laughed out loud often. The stranger sitting on my right, a gay tenor, who was not only Irish but the eighth of nine children, told me that Kendra not only made him feel that he was reliving his life, her observations convinced him to call his sister, who he’d recently argued with, and tell her he loved her.

I found myself impressed enough with Kendra’s quips, observations, delivery and timing, that I actually wrote down some of her jokes. Unfortunately, they’re not as amusing and smart typed as when she said them. Her mother and father split when she was fairly young. She grew up wanting to be like her mother and ended up with the vocabulary of a 40-year-old well-read divorcee. Her father usually got her whatever she asked for – sort of – but told her to tell whomever he sent her to that she was Cutsy Cunningham’s daughter. And when she did , they never knew who he was. She had trouble finding the right kind of guys because she preferred to interpret a man’s lack of interest in her as shyness. She and her sister both love yard sales which is a public admission that they can’t identify trash.

I may not have heard of Kendra Cunningham previously but others had. Boston bred and Brooklyn based, she’s been called a comic to watch by Time Out New York and has been compared to Groucho Marx and May West. She’s made short movies, which have been screened at film festivals. Last year her book of comedic essays, Blonde Logic, written with her sister, was released on Kindle. I bought a copy. Her comedic goal is to get paid to write from her bed where she eats, sleeps and occasionally entertains.

Her current show, This Could Be You, written and performed by her and directed by the very funny herself Mac-award-winning Tanya Moberly will be performed three more times at Don’t Tell Mama on October 25, November 29 and December 13 at 7 pm.