Dan Ruth – A Life Behind Bars

Written and Performed by Dan Ruth 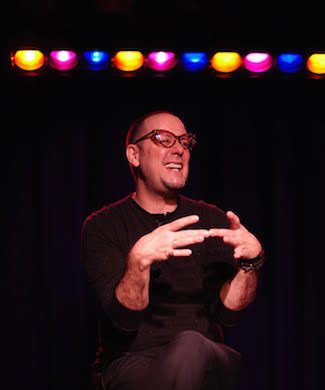 Dan Ruth in ‘A Life Behind Bars’

Monologuist, comic, and bartender Dan Ruth has seen and heard an awful lot – and a lot that’s awful – in his decades treading the behind-the-bar boards in the taverns of New York City. The comedy he’s drawn from that experience is so fine-tuned, his observations and impressions so nuanced and laugh-out-loud funny at the same time, it doesn’t matter that he aims at some “easy” targets in his one-man show A Life Behind Bars. A rich hipster with a man-bun; a Jewish long Islander of a certain age whose Broadway tastes heave towards “Webber”; the Disneyfication of Times Square; we may have seen it all savaged and sent up before, but never quite like this.

Directed gracefully by Tanya Moberly, Ruth alternates between impersonations of some of the characters he’s served over over many years of NYC’s evolving quaffing culture, and autobiographical vignettes muddled with deeply felt agita and spiked with the darkest humor.

I look back on my notes on the segments and am struck by how much anger jets through the content – yet it isn’t an angry performance. Anyway, it’s not the kind of rage that leaves a bitter taste, otherwise how could it be so funny? Ruth’s fury at nearly everyone, from NYC health inspectors to an intrusive and homophobic landlady, recollected in tranquility and conveyed with measured energy and often at breakneck speed, delivers not bitterness but symphonic tension and release – and laughs galore.

In part it’s the story of his own descent into and recovery from addiction, but he leaves frank talk about that for a coda. By that time he’s revealed both his crusty and his sweet sides – artfully yet seemingly guilelessly – so that we’ve come to feel we know him as a complete person, not as the collection of reality-show quirks and flourishes a lesser storyteller or comic might make of this material.

This is a very local show. Out-of-towners won’t get all the references or know the subcultures of different neighborhoods of different boroughs, which provide Ruth with much of his ammunition. Nonetheless the personality, the persona on stage, is so fully realized it can probably carry any audience past most of that.

This superb solo show has two more performances scheduled at the Laurie Beechman Theatre at 407 W. 42 St., NYC., May 9 and May 17. For tickets visit OvationTix. (Recommended for those 18 and over.)