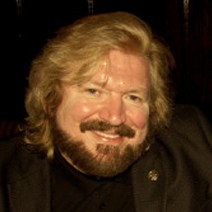 “Lemme tell you, Larry (pictured) is a prolific composer, lyricist, arranger, producer, and he has a Grammy Award” began host Klea Blackhurst. Iteration No. 6 of the artist’s work packed The Triad with admirers. An impressive roster of talent was well-matched with songs showing the vocalists’ strength and the writer’s versatility. Highlights follow.

As usual, Danny Bacher both played (well) and sang. The performer has an appealingly cottony, resonant voice and can deliver expert scat reminiscent of Louis Armstrong. “Baby, What a Life!” and “Solid, Jackson!” showed off natural, hipster swing. Nina Hennessey’s “Stay with Me,” a gentle bossa nova, was enhanced by the sensuality of both the vocal and her movement. Later, “Hot Tambu,” though infectiously fun, more than reminded one of “Not Constantinople.”

As rendered by Marissa Mulder, the lovely “Drifting,” about Alzheimer’s/dementia, arrives with breathy, sympathetic softness by way of the singer’s dignified presence. A charming, 1930s-like “You’re Gettin’ to Me” brought out her signature flirt. Shades of “Harper Valley PTA” were apparent in “Mama Was a Workin’ Girl.” Tanya Moberly, to whom this kind of song is mother’s milk, gave it just the right blues/country ‘tude. (I’m hoping for a new show from this talent.)

Two very clever, double entendre-filled numbers were performed by Jeff Harnar and Sidney Myer. Harnar, perched on a stool, clasped hands and made a scene-in-one out of “My Dinner with Mrs. Farnsworth.” Facial expressions, perfect pauses, and affected enunciation brought out terrific humor. In his own inimitable style, Myer sang “Baby, It’s You!” with consummate innuendo.: “I love my coffee black/My cell blocks with a view/But when it comes to lovin’/Baby, it’s you!” A selection for his next show?

Further airing of Kerchner’s humor, “A Jewish Christmas” as interpreted by Mark Nadler introduced such rhymes as “selling” and “kvelling” (bursting with pride), “l’chiam” and “cri-em” (crime), “ham with gristle” and “bissel” (a little bit), “farkakta” (ridiculous) and “docta.” Bravo. Nadler employed his considerable, multifaceted ham acting ability in service of the number. The performer’s version of the unabashedly romantic “It Was Paris,” written about the author’s honeymoon, rang true.

Inspired by the Sandy Hook massacre, “And Now” was given due gravitas by Shana Farr, who followed with the enchanting waltz, “Dreams.” As Nadler observed, Joie Bianco’s 1940’s era “On Christmas Day” was like watching and listening to a young Judy Garland without the barbiturates. Bianco’s skill is a constant astonishment. “It wasn’t enough/Not for you, not for us,” Marieann Meringolo sang with resigned melancholy, displaying her beautiful, controlled vibrato.