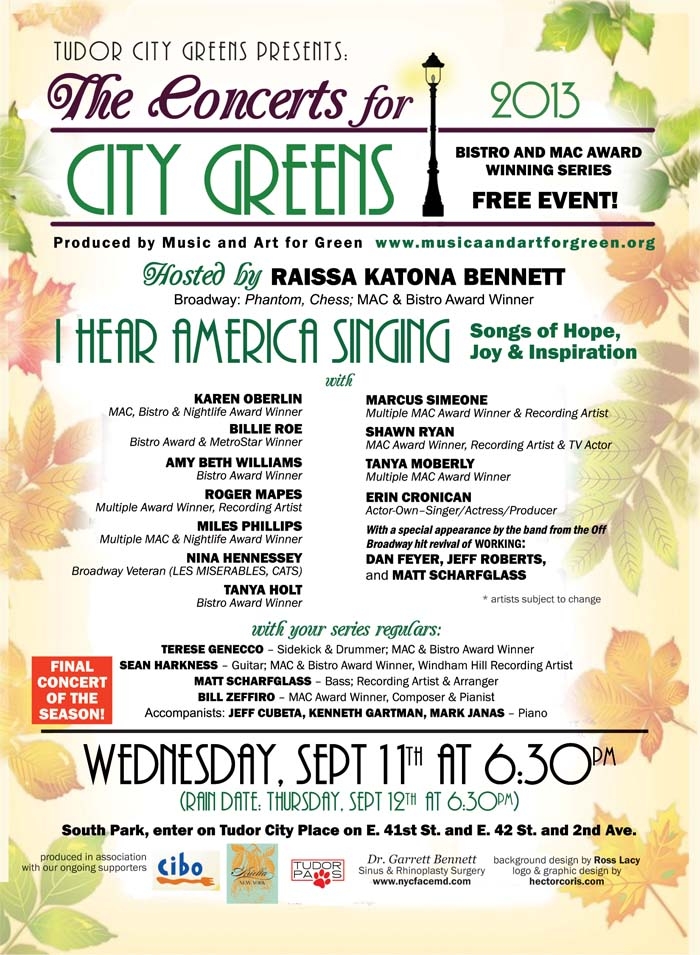 The Concert for City Greens “I Hear America Singing”

September 11, 2013
Raissa Katona Bennett who has won the MAC and Bistro Award as Outstanding Host for her spring/summer outdoor concert series “The Concerts for City Greens” concluded this year’s series on September 11 with a program entitled “I Hear America Singing” featuring songs of hope, joy, and inspiration in honor of the anniversary of that fateful day for many of our friends and associates.  On one of the hottest days of the year, the sun began to fall and breezes began to cool everyone off as the program progressed with top singers and instrumentalists each doing their individual song of celebration.

There were stars from the pantheon of opera, jazz, pop, rock, and many MAC, Tony, and Bistro winners among the performers.  The regular band included Terese Genecco on drums and percussion, Sean Harkness on guitar, Matt Scharfglass on bass, and Bill Zeffiro on keyboard.  Additional accompanists on individual selections were Kenneth Gartman, Mark Janas, and Jeff Cubeta!  You couldn’t ask for better musicians and some of them did individual solos and duets with performers.

The opening was a wonderful group led by Bennett singing “I Hear America Singing.”  The sound and lighting were terrific and everyone was in superb voice.  After Bennett’s opening speech, we were treated to Tanya Holt and Marcus Simeone doing a Mariah Carey song, “Now I’m Free” and they were sensational!  Then Nina Hennessey with Janas started slowly on “Without A Song” but opened up and belted in her great voice the second chorus.  Then Metro Star Award winner Billie Roe gave us a great version of Billy Joel’s “New York State of Mind.”

Karen Oberlin sang sweetly and tenderly the winner of the series’ original songs about greenery, Larry Kierchner’s “Winter in Manhattan.”  Last month’s program was devoted to his songs.

Tanya Moberly sang a great Zeffiro original with Zeffiro dueting with her.  I think it’s entitled “So What I Still Get New York.”  It’s another winner!

Erin  Cronican, a soaring soprano, brought on Actors-Own, her group of Broadway stars and cabaret singers (a mighty mob) and let them in that great song from “Rent,” “Seasons of Love.”  Her other lead singer was Brian Charles Rooney but in her group were many other famous cabaret and musical theater performers, including Baby Jane Dexter and Maureen Taylor as well as many of the individual performers seated on the stage.  And, of course, everyone in the audience sang out on the famous chorus!

Bistro Award winner Amy Beth Williams sang a song introduced by Frank Sinatra in an Academy Award winning short.  It was Allan Lewis and Earl Robinson’s “The House I Live In” and Williams singing of it was perfection!

Exuberant and exceptional cabaret star Shawn  Ryan had just flown in from Barcelona the previous day and accompanied by Cubeta, sang “Thinking About One More Time.”  Miles Phillips did a very strong version of the anti-war song from “Shenandoah,” “I’ve Heard It All Before.”  Genecco stood before her drums and also with Cubeta on the keyboards, did a strong version of a song I think was entitled “Nothing.”

Bennett herself sang one her staples, “Ordinary Miracles.” Roger Mapes, out of his drag personality as Reverend Yolanda, sang with his guitar one of his own compositions (of course) and turned the audience into a rousing revival meeting!  Kenneth Gortman left the keyboard to sing and he was followed by Harkness who sang the immortal “Imagine” written four years before 9/11 and as pertinent today as it was in the past!

There were raffle tickets from special sponsors and some of them were quite lucrative.  By the time the concert ended, the sun had gone down and the fireflies were spinning around us.  Raissa Katona Bennett led the entire cast in the last number and the audience joined it.  She has a great cause and if you wish more information about it go to www.musicandartforgreen.org

All contributions are tax deductible.