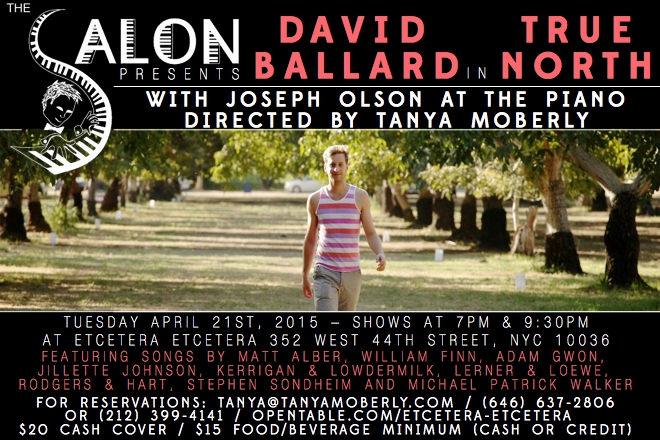 Cabaret ReviewSalon Presents David Ballard in True NorthEtcetera EtceteraApril 21, 2015Reviewed by Joe Regan Jr.Fans of The Salon multiple award winning open mic at Etcetera Etcetera hosted by Mark Janas and produced by Tanya Moberly are very familiar with David Ballard, the Sunday waiter there, who usually takes to stage to sing one number.  Ballard who possesses an extraordinary range.  One night when he perched on the piano he sang an unfamiliar song.  When queried, Ballard confessed that he wrote the song.  Encouraged by Janas to pursue his songwriting skills, and he applied and was admitted to the prestigious BMI Music Theater Writers where he has now been accepted to the advanced class and will be studying with Lynn Ahrens (“Ragtime”) and Robert Lopez of “Book of Mormon” and “Avenue Q” fame.  Janas presented Ballard for his second solo show directed superbly by Moberly at Etcetera Etcetera, on April 21.  Ballard chose to highlight some very wonderful songs by unfamiliar writers.  His musical director and arranger was Joseph Allred Olson who is in his second year of the BMI Lehman Engel Workshop where he has won the Jean Harrington Award for talent as a composer!To a full house of almost 42 fans, Ballard hit a high note with his opening number, “True North” by Jillette Johnson who has done a one woman show at Joe’s Pub.  The imagery in the lyrics was poetic and it was a sensational showcase for his ability to emote and maintain perfect breath control.  Shifting gears, the second number was the Peter Mills’ “Way Ahead of My Time,” the comic gem about a “different” type of caveman.Two of the Broadway rarities Ballard gave full voice to were “I Believe” from “Book of Mormon” delivered with rapid comic tongue twisting, and “Giants in the Sky” from “Into The Woods.” From the William Finn catalogue, Ballard sang a touching “And They’re Off.”  Ballard then switched emotional force for a tender “My Funny Valentine,” never altering the gender.  Elsewhere in the program were three exquisite songs by the team of Kerrigan & Lowdermilk, “Five and A Half Minutes,” “Two Strangers,” and “Run Away With Me.”  In between them was award winning song writer Adam Gwon’s “One by One by One,” and Finn’s crazy song about a Chinese stand, “Mr. Choi and Madame G.”  Ballard also took on the key changing challenge of J. Fred Coots and Haven Gillespie’s “You Go To My Head.”  Ballard’s performance was flawless, easily negotiating the melody and key changes without a break in his voice and going to a soaring whispering finish that was like a kiss!His encore was a song he has sung many a time at The Salon, Lerner & Loewe’s “On the Street Where You Live” given an all out tender, forceful lament and a glorious high note finish!  I can’t wait to hear the fruits of his songwriting in a next show.  He could have sung all night but he had a second show at 10 PM.