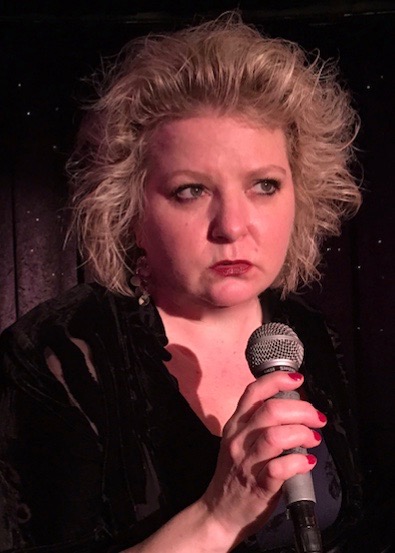 Tanya Moberly does R & B as naturally as some vocalists breathe. In the course of this ferocious show, she’s combative, unhinged, exhausted and raw. Lyrics are pulled like taffy—kneaded, spat and moaned. “Mama, Help Me” (Edie Brickell/Kenny Withrow/John Bush) emerges like the rat-a-tat-tat of a baby’s hiccoughing cry branded by history. Moberly manages to go a cat-on-the-fence octave up without screeching. Pianist Ian Herman’s cranked- up, full-tilt, slammin’ accompaniment is worth its own show.

“I Made a Mess Outta Love” (Lina Koutrakos/Dave Fields) — “…Do you like me rough/Or do you like me sweet?…” (“sweet” is five syllables)—is a challenge, not entreaty. Ritt Henn’s wry, pungent “Maintenance” borders on salty dare. “Tainted Love” (Ed Cobb) is too damn tired to give a damn. Moberly’s voice slides down—rangy, but under control—rough, but with a round edge…. “Don’t touch me please/I can’t stand it when you tease….” The “t” could draw blood.

Performing sections atop the piano and on either side of the stage: too premeditated. It’s unnecessary in such a small area and contradicts the frayed-edge feel of the show. Moberly barely moves; a rising hand is about it. Though plowing everything into embattled lyrics is swell, one misses some indication of unbridled feelings. Facial expression is also subtle. This “character” is never overcome, more often angry than hurt, sometimes spaced out.

“Lionel Say” (Jim Infantino) is fast, clean, partly talked. Piano pulsates. A powerful rendition of “Missing” (Beck/John King/Mike Simpson/Marcos Vinicus de Moraes/Carolos Eduardo Lyra) passes through—a speeding, brakeless train. Not until “I’m Only Sleeping” (John Lennon) and “All Mixed Up” (Ric Ocasek) are we allowed respite. All things being relative, these are subdued— the first poignant, the heady second, lost. As performed, every song combusts at about the same level. Moberly’s evening needs some lower-key lament to color and balance. “I’m Just a Lucky So-and-So” (Duke Ellington/Mack David), for example, is a missed opportunity for muted wah-wah jazz.

This is a really good show that could be great, by an artist with ripe instinct, steely determination, and barreling talent. The title here is a misnomer. There are blues songs, but most choices are straight up R & B, a few are pop.