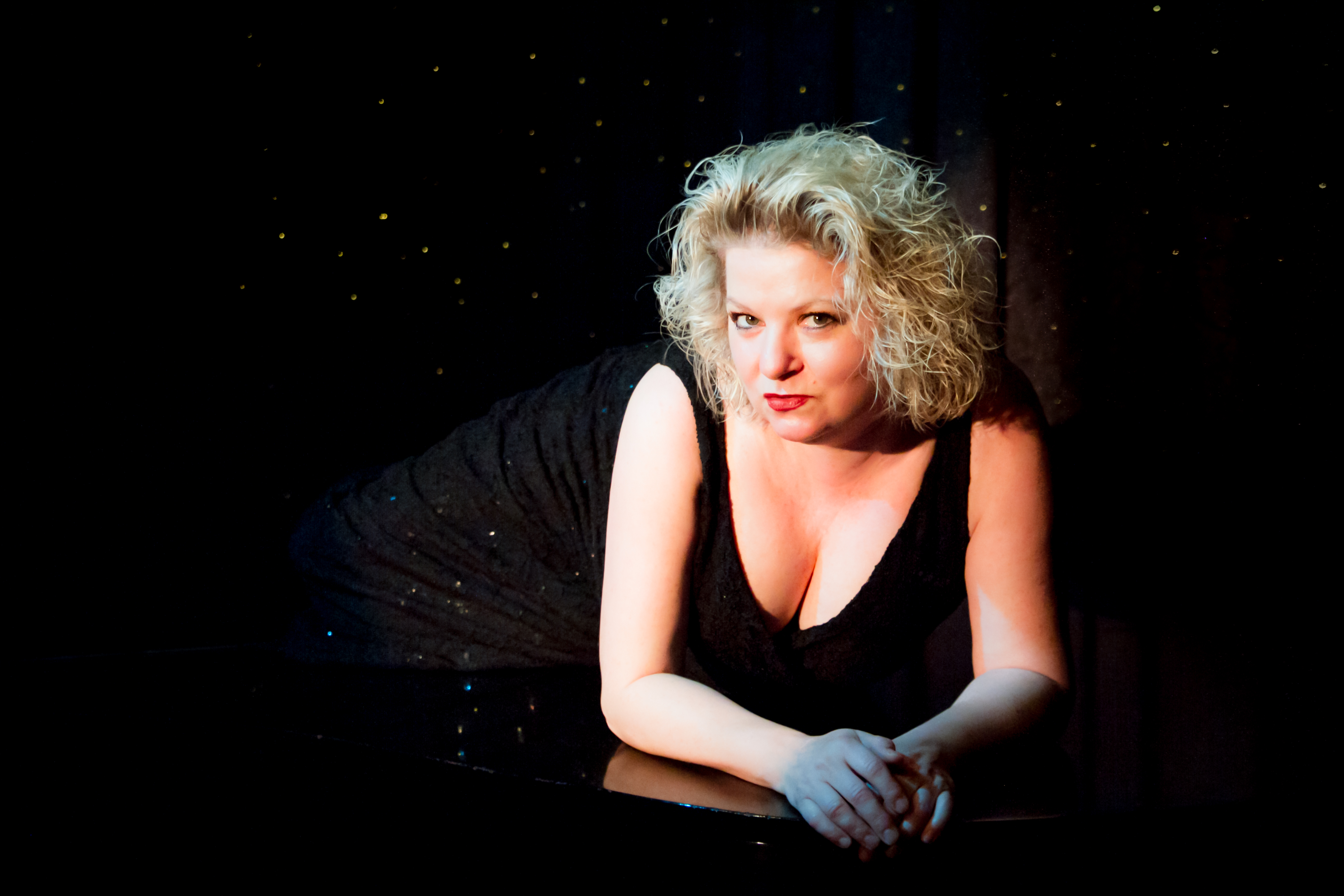 It’s a double deal with Tanya Moberly. There’s the firestorm, natural and raw, screeching Clark Gesner’s “Schroeder” as pianist Mark Janas concentrates on Beethoven’s Moonlight Sonata. Then she’ll turn on a dime with an expressively articulate Cole Porter classic, “I Get a Kick Out of You.” And turn again vigorously vowing, “I Resolve/Come what may/I will not be this girl one more day” (“I Resolve”; Jerry Bock and Sheldon Harnick) and share Bernstein, Comden and Green’s advice for “One Hundred Easy Ways to Lose a Man.” Before you know it, you’re on a personal ride through life and yearning with Tanya Moberly.

In her show, Songs I Feel Like Singing at Don’t Tell Mama, Moberly organized four different programs with four different musicians. Here, Janas is her sidekick, neatly matching her mood swings as she conjures up a theatrical program tied together with personal stories of passion, loneliness, and humor.

Moberly is a master storyteller. Most of her selections here are from the theater, such as Richard Rodgers and Lorenz Hart’s “Ten Cents a Dance” (Simple Simon), which adds a zap of flair. She presents them as mini-dramas, zoning in on the context, evoking the passion and longing of ordinary women burdened with everyday drudgery, but yearning for the “Colored Lights” (John Kander and Fred Ebb) they know they will never see. She is the factory employee in James Taylor’s “Millworker,” and looks at Mack and Mabel‘s reprise of “I Won’t Send Roses” (Jerry Herman) from the woman’s side.

Her voice is layered, a tone that can be shrill, or punch out power and rage in “I Don’t Remember Christmas” (David Shire and Richard Maltby, Jr.), and break your heart with the poignancy in Lionel Bart’s “Where Is Love?.” She evokes the palpable pathos in “Somewhere That’s Green” (Alan Menken and Howard Ashman), where her character, even with a black eye and arm in a sling, dreams of a Father Knows Best future. She offers a chin-up attitude in Carol Hall’s “Hard Candy Christmas” and invites Burton Lane and Alan Jay Lerner’s safe haven with “Hurry! It’s Lovely Up Here.” With very little patter, Tanya Moberly ties up her drama with Stephen Sondheim’s “I Know Things Now” (“Isn’t it nice to know a lot!/And a little bit not…”)

Different programs of Songs I Feel Like Singing vary with jazz, rock, and pop. In June she is accompanied by Sean Harkness; in July, it’s Ritt Henn; and in August, Steven Ray Watkins. And getting to the core of it all is versatile Tanya Moberly, one of a kind.