The Off-Off Broadway Review – “Good to the last drop,” 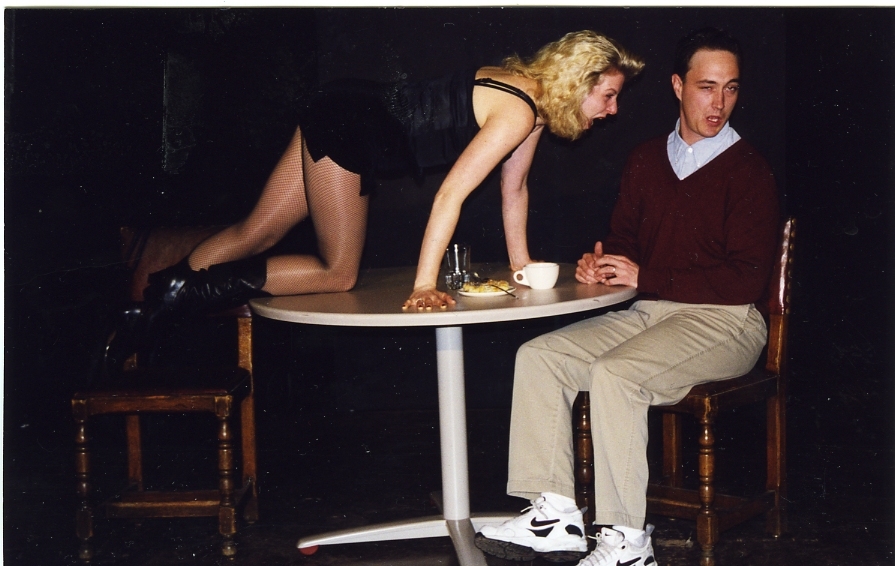 Henry Meyerson’s Java Jive is an evening of six one-act plays that meditate on life, love, and the role of coffee in our lives. With the overwhelming success of Starbucks and other such coffee shops, more and more of our interactions happen across a table and over a cup of Joe. On this wacky journey, Java Jive asks the question: is coffee the answer?

Meyerson doesn’t provide an answer to that question, but who cares? With a few well-chosen, accurately pointed comic darts, Meyerson turns a mix of late 20th-century archetypes – including codependent losers in love, men hurtling towards the precipice of 40, and neurotic Wall Street types on Latte overdrive – into skillfully drawn observations that wisely leave the answer up to the individual viewer. Not everything works: a few of the pieces resolve too quickly while others go on long after the point has been made, and the final act, while beautifully performed, just brims pointlessly over the top. But the overall effect is one of gently satiric fun. Meyerson also has a gift for writing expository dialogue in an engaging way that furthers the plot without information overload (a problem that has recently plagued several other productions).

James Alexander Bond directed with a masterful delicacy and a pure comic inventiveness that rarely, if ever, flagged. In what can be assumed a brilliant directorial coup, the six plays were tied together as one of them interweaved through the action of the other five, giving the evening a wholeness of tone and purpose not normally associated with productions of this kind. Bond also used a lack of physical trappings to his, and the performers’, advantage. Two black-and-white checked cafe tables, a variety of character-appropriate costumes, and simple lighting were all that were necessary to give the four performers the room they needed to dominate, which they did with a free-wheeling, well-polished glee. Karen Leeds, with just a flick of a finger or the nervous tapping of a foot, took codependent dysfunction to the level of high art, while to hear the wonderful, chameleon-like Tanya Moberly spit out the word “Charm” was worth twice the price of admission. Likewise, John Samas and Todd Allen Durkin brought an expert sense of timing and physicality to their roles, Samas especially hilarious as a 40ish master of passive-aggressive manipulation, and Durkin scoring as a geeky S&M wannabe.

At just over an hour, the production whizzed by at a breathtaking pace, and like a good cup of coffee, left one wanting more. But the resulting caffeine high lasted far longer, penetrated much deeper, and left a better aftertaste than any four-dollar Designer Cup of Joe ever could.